A Good Thing Keeps on Getting Better

The TR1200-DT7 Treadmill Desk, the versatile star of LifeSpan’s line of exercise desks, has found continued success. Since its inception in 2011, the treadmill desk has been adopted by groups spanning public education to Silicon Valley tech giants. The success of the best-selling treadmill desk speaks not only to the quality of its construction, but to the general acceptance of the active-office movement.

We’re exceptionally proud of the accomplishments of the TR1200-DT7, says LifeSpan VP of Sales, Bobby Krause. But we’re similarly happy to see a growing adoption of the LifeSpan Workplace philosophy. If this product can help return movement to people’s day, it’s achieving something very positive

LifeSpan’s wunderkind has found resounding success with high-level professionals, from Cosmopolitan Magazine editor-in-chief Joanna Coles, to Zillow CEO Spencer Rascoff. I love [this] treadmill desk, Rascoff says. It gives me more energy throughout the day… I do all my email and phone calls while I walk.

Businesses, government agencies, and schools have snatched up the walking-while-working idea as well, crafting entire work areas around the treadmill workstation. LifeSpan believes that the unit’s compelling price, and ability to be paired with a traditional seating arrangement, have made the treadmill desk successful. The optional secondary desktop, referred to as a “tandem” desk, allows for the desk to be more easily shared between multiple users and facilitate a better compromise of both seated and active work.

One such installation to recently gain global recognition was completed by the Danish middle school, Noble Denton. Ten TR1200-DT7’s were recently placed in a communal classroom in an attempt to reduce the amount of time each student spends sitting throughout the day. I see so much potential in this, says Katja love Rask, the school’s principal.

It's about constantly uncovering new ways to stimulate students' learning. Our teachers…are very surprised at how positive of an effect it has on kids. The response from educators has been equally as pronounced domestically, with major universities including Oklahoma State, Ohio State, and Iowa State utilizing the LifeSpan treadmill workstation.

I prefer to stand and work now instead of sitting, it just feels better, says Gregory Welk, Director of Clinical Research and Community Outreach for Iowa State, who personally uses the treadmill workstation. I’m more alert, I’m more engaged in the task. I feel like I’ve done something. 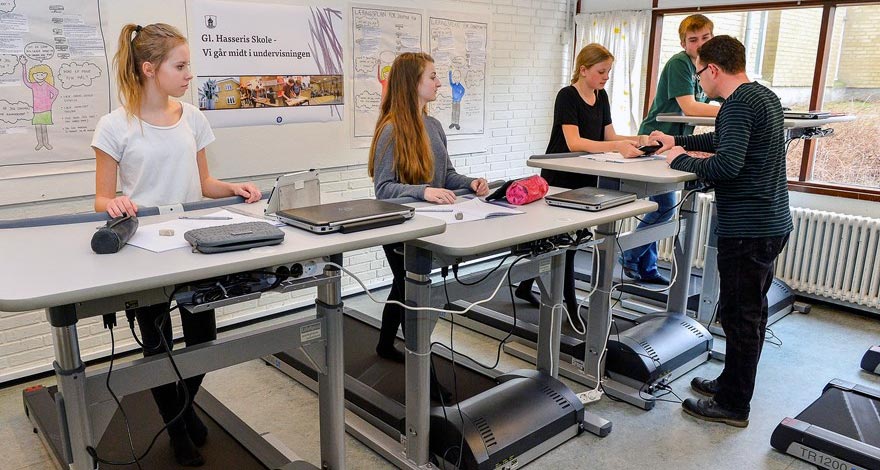 New availabilities, such as LifeSpan’s recently released Privacy Panel, allow for individual walking treadmill desks to be customized to fit both the style and the functionality of each TR1200-DT7 user. The environmentally-friendly panel, made from 40-50% recycled plastic bottles, is effective at both dampening sound and further enhancing the desk’s professional appearance.

We always intended Workplace products to exhibit professionalism and enhance the productivity of our users, Krause says. The privacy panel and tandem desk are just two ways LifeSpan is helping to make an already successful product, like the TR1200-DT7, even more effective.