This isn’t a battle for championships or gridiron glory, however. There are no opposing teams, or even a dedicated finish line. No, this effort, rather, is focused on destroying silent killers and maximizing lifespans. This is a movement of well being, based in science and founded on culture. OSU is fighting to create the healthiest college campus in America, and they’re willing to defy the status quo to make certain that it happens.

The school’s quest for widespread, total-body health has not only led to new programs and new equipment, but to fresh faces on campus. [Oklahoma State] is America’s Healthiest Campus, says Suzy Harrington, the school’s first-ever Chief Wellness Officer. It’s not just a tagline. We’re enriching the lives of our students, our employees, and our community.

She may be right. In the year and a half since her arrival on campus, the school has made visible attempts to dramatically benefit employee health. Through improvements such as new, campus-wide walking paths, subsidized gym memberships, and the addition of both standing and treadmill desks, the school has made considerable strides.

What we try to do is build activity into everyday life, she says. Any day you can see people walking. Our recreation center is jammed, and it’s large. We haven’t raised our insurance for our employees in the past several years, and we were the first campus to be tobacco free. Perhaps a sign that efforts are paying off, the entire Stillwater-based campus was recently dubbed a Certified Healthy Business by the state of Oklahoma, and 23 of the school’s satellite extensions similarly received the same honor.

Dr. Harrington’s employment itself is rather groundbreaking, considering that at her point of hire she became only the second chief wellness officer at any university in the nation.

We’ve seen her efforts start to permeate our culture, says Dr. Pamela Carroll, Dr. Harrington’s colleague, and Dean of OSU’s college of education. She’s done a brilliant job. This is a state that’s number four from the bottom in terms of obesity in the United States. But if you walk on our campus, you don’t see that. We’re really doing a good job of promoting healthy lifestyles.

Dr. Carroll is a direct beneficiary of OSU’s revamped dedication to all-things wellness. According to her count, roughly 18 members of her staff requested and received standing desks, and her college was the first on campus to receive a communal treadmill desk. I’ve encouraged everybody, from the web designer, to the associate dean, to go and try out this fabulous new treadmill desk, she says. I really do see this kind of push as an equalizer. I think this will be the next step for us. I think as people experiment with [it], we’ll have more and more requests.

Oklahoma State’s ingenuity, however, is not necessarily a novel idea. Devotion to health and wellness in the collegiate setting is becoming more common than ever. Successes are inherently public and paths to success are discussed openly. Anything that we have, Dr. Harrington says, we’re willing to share. 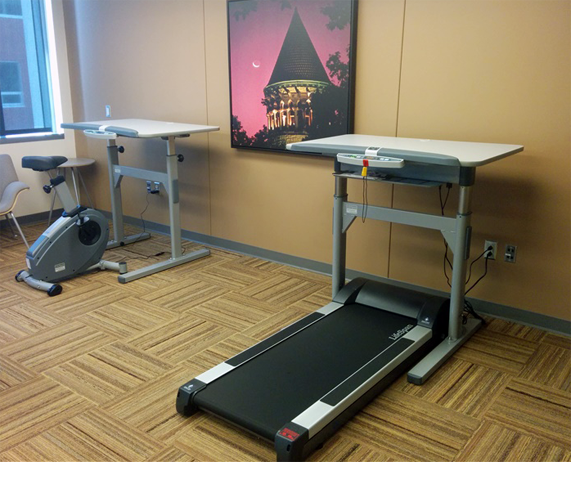 Dr. Bernadette Melnyk, Dean of the college of nursing at Ohio State, is the first-ever chief wellness officer in a university setting. Outside of sharing a piece of occupational history, Dr. Melnyk also seems to share some of Dr. Harrington’s philosophies on wellness. When you build a wellness culture, you have to do it from top leadership who support it, who walk the walk, she says. But you also need support from a grassroots level. We create a critical mass of folks who are engaged with us, constantly, all across campus. Doing competitive fun, challenges, making healthy food choices available, and engaging people in stress reduction.

Similarly to their cowboy counterparts, the buckeyes are leaning heavily on a comprehensive approach. We have three categories, Melnyk says. Culture and environment…population health…and fiscal health. That’s where we really put value on cost, return on investment. Physical activity, healthy eating, [smoking cessation], and if you drink alcohol, [drinking] in moderation. There have been studies that have shown that just those four healthy lifestyle behaviors can reduce the percent of chronic conditions substantially.

Ohio State also advocates moving while working to promote better overall health. That’s a big focus of what we’re doing here, she says. People have been putting walking treadmills all across the university.

Dr. Greg Welk, Director of Clinical Research and Community Outreach at Iowa State, seems to stand on a similar foundation. Through his initiatives, the cyclones have recently made forty treadmill desks available to their faculty and staff, finding both high levels of use and rave reviews. The interest has been incredible. We had so much use that we had to institute a sign-in sheet to reserve walk times, Welk recently told Inside Iowa State. The effort is part of a combined research study involving the benefits of workplace motion and the potential reduction in chronic diseases including obesity, heart disease, stroke, diabetes, hypertension, cancer, depression and anxiety, arthritis, and osteoporosis. Though biological changes are still being analyzed, verbal feedback from participants has been exceptionally positive. Approximately 82% of participants specified that they would recommend the treadmill desk, and 73% agreed that the university should consider getting further units for their employees. 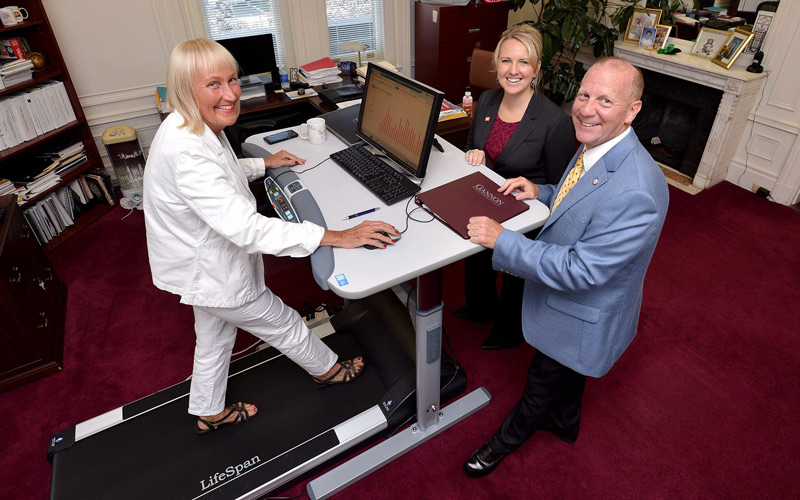 Considering these school’s behemoth student populations, thousands of staff members, and impressive endowments, it may seem as though scale or budgets are a precursor to wellness success. Gannon University, however, a small college out of Erie, Pennsylvania, is turning that perception on its head. Passionate staff and dedicated upper management are creating impressive results that seemingly don’t have to come with eye-popping budgets.

In an attempt to improve total-campus activity, Gannon has become one of the largest adopters of both healthy initiatives and treadmill desks. Connie Kercher, assistant vice president of student development and engagement, is the tip of the institution’s wellness spear. The absolute commitment to wellness is something that we’re leading the charge in, she says. We nurture a culture of wellness. We have seven pillars, seven domains. Environmental, intellectual, spiritual, social, physical, emotional, and occupational. Our wellness program promotes a culture of all of those.

Not your typical corporate wellness program, Gannon’s efforts are tangible in both their application and their results. Kercher believes that by analyzing the success of her programs at the individual level, where the change is actively occurring, the most valuable data can be found. A lot of our indicators are participation, she says. Seeing a reduction in time off is something we’re now tracking, seeing if our efforts are paying off in terms of the happiness scale. Are our faculty and staff saying that [they’re] feeling more fulfilled and more able to fulfill [their] duties… by becoming more active? That’s more the quantifiable, qualitative discussion.

Listening to Kercher speak, it’s obvious that her heart lies with her methods.

We’re getting emails everyday saying thank you for reaching out, and for following up, from all different levels of our staff and our employees. We have truly made the intentional decision to say that wellness for Gannon means that it’s good for you here on campus, good for you as you’re growing as a professional, good for you in your family life, and good for you while you’re going out in the community.

Regarding the impact of a walking treadmill desk, she’s similarly certain. We’ve had treadmill desks rotating between office space, open lounge space, potentially coming into a library demo and pilot time, in our residence halls… We’re seeing this as a dynamic piece of equipment to raise awareness of overall wellness. Have we seen positive feedback in terms of actual users that are consistently doing work? Absolutely. We’ve heard consistently that it’s helped to keep [employees] streamlined, and keep them…more efficient throughout the day.

Regardless of the size of the group or the scope of the efforts, these academic organizations seem to share an obvious commonality. They’re all ravenous in their pursuit of health, and aren’t willing to keep any secrets. You have to think of wellness of who you are, not what you do, recommends Dr. Harrington. Dr. Carroll feels similarly, offering assurance to those who have yet to begin down a similar road. Gather some like-minded people around you, and get started, she says. Start small, but get started. Get some momentum going.