Get Up and Move!

But back in 2010 I found out that I was wrong…dead wrong. While perusing my favorite men’s magazine I happened upon an article that reported new research that seemed to indicate that an inactive lifestyle and sitting for long periods of time (basically more than 3 hours at a time) was as hazardous to your health as smoking cigarettes. Even worse, doing the government recommended amount of exercise wasn’t enough to combat the damage caused by all that sitting. I almost fell out of my chair!

For the past two years I have been combing through the research on what has become known as sitting disease which has resulted in my book Is Your Chair Killing You? When I started looking into this there were lots of intriguing studies but most of them were small, food for thought, but not much more.

But recently, that all changed with a new Australian study that looked at death rates over a three-year period. The study concluded that people who spent a lot of time sitting at a desk or in front of a television were more likely to die sooner than those who were only sedentary a few hours a day.

The lead author of the study Hidde van der Ploeg and his colleagues at the University of Sydney found that of more than 200,000 adults age 45 and older who reported sitting for at least 11 hours daily were 40 percent more likely to die during the study than those who sat less than 4 hours daily. 40 percent!

The results appear in the Archives of Internal Medicine, March 26, 2012, and reveal that the link between too much time sitting and shortened lives stuck even when they accounted for how much moderate or vigorous exercise people got, as well as their weight and other measures of health.

Another study released in July of 2012 showed that an analysis of five large studies that followed about 2 million people (not a small study at all) in several different countries lead by Peter Katzmarzyk of Louisiana State Universities Pennington Biomedical research Center found that the life expectancies of people who said they spent more than three hours a day sitting were a full two years less than people who spent less than three hours sitting daily. Maybe even more surprising was that this was true regardless of whether subjects reported getting the recommended amounts of exercise or not.

Then came the study in the October 2012 edition of The American Journal of Kidney Disease which found that after surveying more than 6,000 adults, the ones that spent the least amount of time in the seated position had the lowest risk for developing chronic kidney disease, regardless of the amount of regular moderate to vigorous sustained exercise they got.

The latest shot over the bow of our preconceived notions sedentary lifestyle risks from The Journal Diabetolgia released October 14th 2012, which found a link between an inactive lifestyle and health risk.

The British researchers analyzed the data from 18 studies that had more than 793,000 participants. What they discovered was people who sat for long periods of time over the course of the day had a two-fold increased risk of diabetes, heart disease and death. Again exercise had little or no effect.

All this might seem like very bad news. I mean, if sitting for long periods of time is deadly and exercise won’t save us then we’re doomed, doomed I tell you!

Whoa…dial it back my pessimistic friend, because the solution is actually incredibly simple…Stand up. 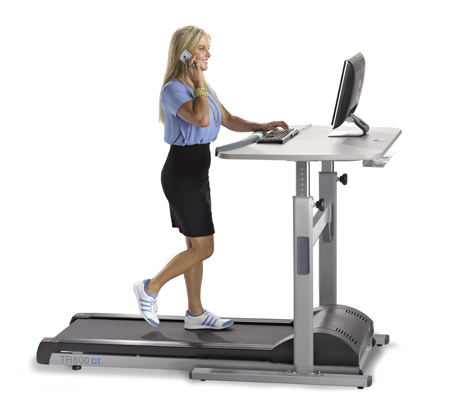 That’s right stand up! What every one of these studies actually says is that we sit down too much. The natural state for human beings is upright. The time has come to release yourself from the chains that bind you to your chair and stand up for your health! Get out of that chair and move around. Breaking up the bouts of long periods of sitting seems to be the key.

Get yourself a walking desk treadmill! Our ancestors swept across Africa, populated the Middle East and conquered Europe thousands of years before we domesticated animals or invented the wheel, which means they did it on foot.

Yet today we do very little of this walking thing and it’s beginning to show. I won’t bore you with the numbers, but heart disease, obesity and diabetes is running rampant in this country with no sign of slowing down. In fact the only thing that seems to be slowing down is us.

So, my friends, GET UP AND MOVE, and I guarantee you and your body will be happy you did!